I am VERY bored with Marleybone currently. I am PUSHING myself to EACH and EVERY side quest, and... uh, I'm getting bored. I felt very happy with myself for completing Ernest Haldings' first quest in Chelsea Court, which, by the way, is one of those quests where you fight something over and over again until you get an object, which, you have, like, a 10-20% chance of getting. Defeating these dumb clockworks. I fought, like, 40 of them and I finally got the internal gear. I was "[in](e)ternally" happy. I was like, "I DEFEATED 40 CLOCKWORKS! I CAN TAKE ANYTHING ON! EXCEPT MORE CLOCKWORKS!" Well, when I found out my next quest was to do to fight more clockworks, and collect another 10-20% chance item, I felt the urge to yell at Ernest Haldings and tell him "THERE IS NO WAY I AM GOING TO DO YOUR SECOND QUEST!" But, of course, the part of me that is OBSESSED with doing side quests won over. 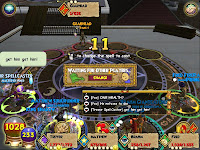 
The whole time I slaughtered poor little clockworks for a greedy mutt who wanted spare parts, I think I made their village mad. Because, after that, I had bad luck each time I faced them.

For Example: Look at the picture on the left- EGAD! ONE HEALTH!

And from then on, in ALL my battles against clockworks, they attacked me, not one of the other two random guys O. O